As most of you know, I have a lovely mare named Charlotte, aka Charby. Now, horses are herd animals, but Charby has always been very independent. When the other horses were congregated in the upper field, she’d be down in the lower corner, grazing away. She is also the boss mare, if she wanted the horses with her, they darn well better be with her.

When my Mom moved, I figured that Charby would be fine by herself, as she had always been so independent. She was for quite a while, but she has slowly been getting more and more skittish. I have been considering a friend for her. I was thinking a mini horse or donkey, but had concerns on whether she might be too rough for something that size while impressing her dominance on it. This was also an abstract thought as I didn’t think I really had the funds to get anything anytime soon.

Yesterday however, I found a “free to a good home” pony. 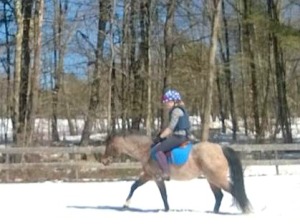 The pros are that he’s male (mares like running geldings around, and geldings don’t seem to mind); he’s free; ponies don’t eat much; he’s large enough that she would consider him an actual equine being; he’s young so I can ride him more as Charby gets older.

The cons are an extra mouth to feed (for some time to come, as he is young); an addition to barn (fortunately small as he is a pony!); and another horse to exercise–I had some tough times exercising Charby last year.

So, I throw it to you guys: new pony for Charby or not?

PS if it helps, we are surrounded by all things Pooh. My husband still has his original Pooh from his crib, and does like to say “oh bother”! Our boat is named Pooh as well–it came that way 🙂 Sometimes things are just meant to be.