Polaroids, you say? Who still has a polaroid camera? Well, it turns out, I do. A Polaroid ColorPack II, which was my grandfather’s. It lived in my parents library for as long as I can remember, and now it lives in mine.

Initially produced in 1969, the Colorpack 2 was the first rigid, plastic bodied, color film capable Polaroid to retail at consumer range prices, and set a precedent for many, many similar models that followed. The Colorpack is designed only for 100 series packfilm. Focusing is carried out by turning the distance-marked front lens element; unlike the original Polaroid 100-400 series packfilm cameras, this series features no rangefinder mechanism. As an improvement over the original folding series however, there is no need to cock the shutter after each exposure. The Colorpack 2 also takes generic ‘blue dot’ flashcubes, with a wind-up hot shoe and small plastic diffuser set to one side of the lens. Early versions of this model featured a glass lens, but most were plastic (which mine is)

Okay, I have to admit that I didn’t carry the Polaroid with me on my runs. That could be a bit awkward. But I have gotten some nice photos on my run. I thought I would share 🙂 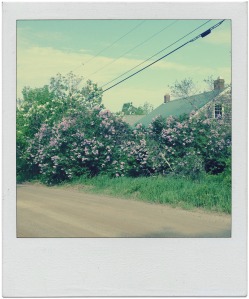 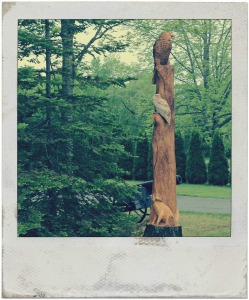 My runs were Lilac–fueled this week, by the time the scent from one had faded, the next bush would appear 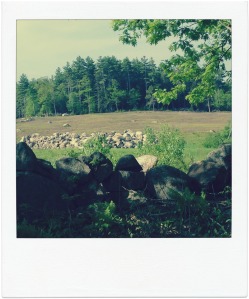 My neighbors “de-rocked” the blueberry fields to make it easier to rake. This pile is a sample of the rocks they pulled out. Maine is outstanding in its field–of rocks!

There is a lot of water on my route; streams, ponds, and bogs. Adds some wonderful tranquility to my run.

These are for SusieShy, she wanted to see some of the small (er) hills I was running to avoid climbing the mountain at the end of my loop 🙂

10 thoughts on “Polaroids from the Trail”

Great Inflatable RaceSeptember 21st, 2019
No 5ks planned right now....except the fun bouncy one in the fall