Weight is a funny thing, isn’t it? Amazing how happy one can be to see a number on the scale on the downward slide, but so very unhappy to see the same number on the way back up.

A number of years ago I set a goal weight, and I have struggled to get there. Now, I was chunky, so my goal weight was really only eight or so pounds away from where I was. But as we all know, I always said I ran to eat pizza.

So although I occasionally lost a pound, my body loves to hold on to each ounce and I never really got to my goal. But at least I stayed even 🙂

Then I had my accident and lost 10 lbs in the hospital–no surprise there. I did gain five back, once I started eating solid food at home. But I stayed there (only three pounds above my goal) for two years. I pretty much cycled through three pounds for those years, but it was consistent.

Then my husband had his heart attack last February. There was stress, of course, and we also drastically changed our diet. He can’t have much salt (oh my, that is high in everything!) or items with a lot of fat. We pretty much stopped eating anything processed. We used to enjoy the “convenience” of frozen pizza, mac and cheese or other frozen dinners several times a week.  We went cold turkey on that. I even make spaghetti sauce each time we have pasta–that would be due to the salt content in commercial sauce. We also were both keeping our portions small in the beginning as well.

Somehow, I lost ten pounds. So here I am seven pounds below my goal!! Whoo-hoooo! Even more odd, I stayed the same weight for several months, not bouncing up and down three pounds like I normally do.

I don’t eat anything really horrible, my desserts are normally ginger snaps, my lunches ricotta and granola and my breakfasts are Zone bars during the week.

So why did I just gain three pounds?????

Part of it is autumn. This is the normal time of year my body craves food and hangs on to all the calories in order to prepare for the deprivation of hibernation of winter. I wish it would realize we don’t hibernate!!! The other part, I expect, is that I relaxed on the “small portion” part. Ooops. And although I am running again, I haven’t been doing very many or very difficult sessions. Double ooops.

Where does that leave me? Well, four pounds below my goal weight. But now my goal is to stay where I was. I have no interest in continuing to gain weight throughout the winter, that will only make my spring harder. And while I really don’t want to go lower than I was, I do want to stay there–I liked it 🙂 So now on to the hard work-less food and more exercise.

It’s September! And my favorite season has started: Autumn.

Ok, so chronologically summer isn’t over, but I am ready for cool nights and warm days, vivid color in the trees and cinnamon-pumpkin everything.

Summer has been a race this year.  We dashed from weekend to weekend, trying to squeeze in as much time on the boat while trying to get things done at home, and then sprinted through the week at work to do it again.

Since this is the time to start slowing down, I figure it’s the perfect time to do a yoga month. I have been thinking about it for quite a while, but with the rush of summer I haven’t been doing much of anything but getting through my workouts.

I realized that I really haven’t done any real yoga for several months, just adding some stretching poses in my other workouts. I always feel that yoga is beneficial to everyone, regardless of their primary sport.

So this month, I will focus on yoga and practice some everyday. And I bet I will feel so much more relaxed and composed at the end of it. 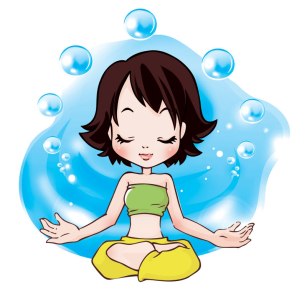